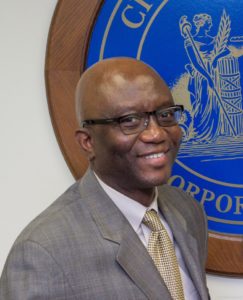 For approximately 30 years Mr. Afolabi was the City of Newark’s key asset in guiding applicants and overseeing plans and development on the Cities behalf until his retirement in 2017 to allow him to start his own consulting firm. Mr. Afolabi is a Certified Zoning Official and a seasoned land use and zoning consultant. He held the position of Planner and Zoning Officer during his tenure with the City of Newark , New Jersey. As the Supervising Planner, Mr. Afolabi played a critical role in major development within the City, including the development of the Prudential Center, NJIT, Essex County College, several redevelopment projects for Rutgers and the Performing arts center, along with every developer and investor who has required the planning boards guidance, including contractors, lawyers, engineers, and architects.

He has served under four of Newark’s presiding mayors including Sharpe James, Cory Booker, Luis Quintana and our present day Mayor Ras Baraka. He has been an intricate part of working with the Cities officials and other professionals to develop and maintain the City of Newark’s master plan.

There is no merger of road, rail, water and air transportation adjacent to a concentration of consumer wealth like the City of Newark anywhere in this Country. The properties that support that network are not the typical industrial properties. No other broker knows those properties, their history’s and nuance’s like PRE. - Jamm Realty Holdings, LLC

We know the market place and strategies, allowing us to negotiate the best terms for our clients.

Representing our Clients interests, knowing exactly what your looking for and the experience to help your business and investment portfolio grow.

Off market properties, our contacts allow us to work on projects not on the internet marketplace.