Newark’s art deco-era Penn Station is going to get $160 million worth of tender love and care, befitting its status as one of the transportation gateways to the city and the state, Gov. Phil Murphy announced Tuesday morning.

The station also could be the home of a statue honoring the founder of a union representing Black railroad workers, said Lt. Gov. Shelia Oliver.

“For many people, the introduction to New Jersey is Newark Airport or Newark Penn Station…this is a new beginning for this historic building to restore it to its full grandeur,” Murphy said during an outdoor press event in a plaza next to the station.

Looking beyond the coronavirus pandemic, Murphy said the station “must drip with the pride the city feels” as it redevelops, attracts businesses such as Audible and Mars Wrigley candy company and visitors to the Prudential Center and restaurants in the Ironbound neighborhood.

The $160 million in state-funded restoration and rehabilitation work answers a “need” the city and state officials heard from businesses and developers to have an “attractive and welcoming” Penn Station, Murphy said.

Work is scheduled to begin immediately with an initial $30 million in renovations and restorations, with additional upgrades scheduled over the next five years. Work has started on the original waiting room floors, said Kevin Corbett, NJ Transit CEO.

“We’ve long recognized the need for a capital improvement upgrade that’s focused on infrastructure and the customer experience,” Corbett said.

The work also includes amenities for commuters and Amtrak passengers, including refurbished restrooms, heating and ventilation systems, escalators and conversion of freight elevators for passenger use and work on station platforms.

The work builds on a restoration of the historic Penn Station waiting room done by NJ Transit in 1994 that uncovered a sky blue stone ceiling with bronze leaf accents, cleaned and refurbished the white bronze encased globe lights and other decorative features that the Pennsylvania Railroad included when the station was built in 1935.

The station’s original long wooden benches, that are in dire need of work, will also be restored. Two benches already have been restored and are installed in the waiting area. 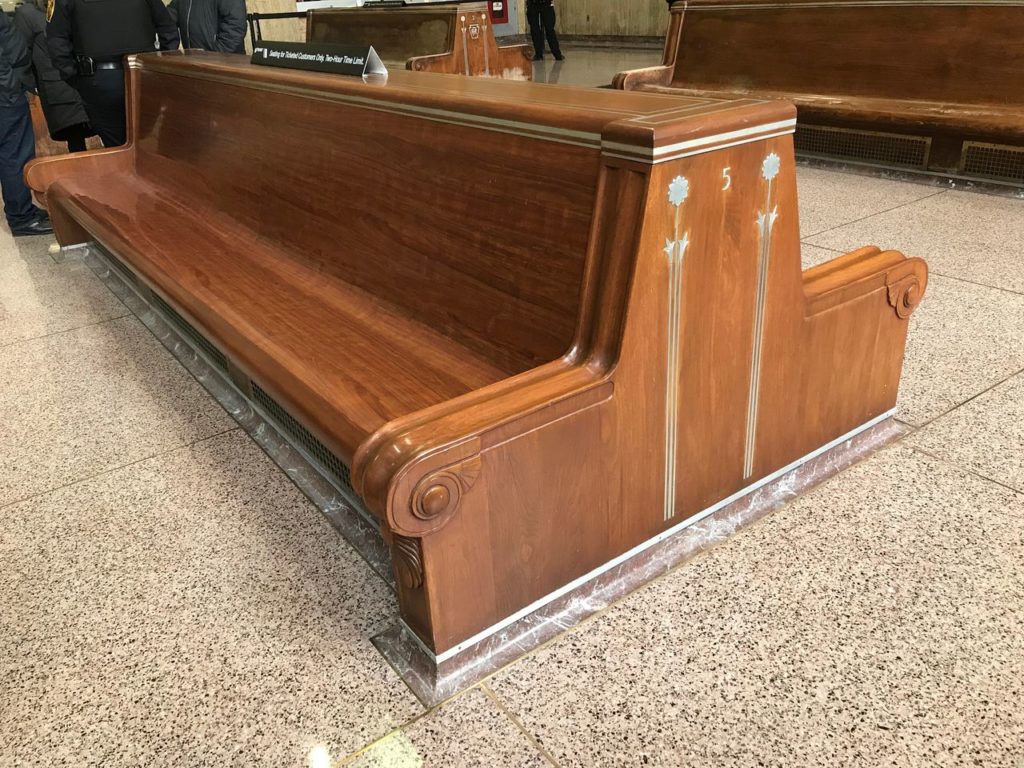 Lt. Governor Shelia Oliver alluded to the station’s past and its stature as the seventh busiest rail station in the nation, used by 50,000 passengers daily.

Penn Station also could be the future home of a statue honoring A. Phillip Randolph, who founded the union representing Pullman porters, who’s ranks were mostly Black men who worked on the company’s sleeper car fleet that ran on the nation’s railroads during the late 19th and early 20th centuries.

“A group has been working to erect a statue. … Randolph led the labor movement and there would be no better place to see a statue,” Oliver said.

A museum named for Randolph that chronicles the story of Pullman Porters is located in Chicago.

Bus riders, who use the bus lanes next to the station, will get new lighting and improved drainage.

The first phase of renovations will also focus on aesthetics such as installation of brighter lighting, updating of the bathrooms, improved HVAC and air-handling, fresh paint and tile, and a deep clean of the limestone exterior to once again showcase the architecturally significant façade.

In the bus lanes, new lighting and improved drainage will improve the rider experience. The station will get improved directional and way-finding signs to help riders “make sense of this station’s labyrinth of platforms and hallways,” Murphy said.